During recent meetings in North America, we have been asked a number of times to produce a three-night itinerary for clients of New Zealand specialist travel agencies who are tired of the traditional “if it’s Tuesday, this must be Rotorua” style of tourism, and who instead want to really experience the places that they are visiting. They have recognised what we have long said–that Oamaru offers visitors a taste of all the things that people associate with New Zealand (nature and wildlife; gourmet food and wine; beautiful scenery; adventure) while also offering some things that may not be so associated with the country like history, culture and art.

We thought we’d share this three-night itinerary with you, too:

Day One: Arrive at Pen-y-bryn Lodge in the afternoon and after being given a tour around the property (it’s the largest single-storey wooden dwelling in Australasia, with lots of things to see) and a welcome glass of local wine, either relax in any of the lodge’s many comfortable rooms or venture into town to explore the best-preserved historic town in New Zealand before joining your hosts for pre-dinner canapés and drinks. Afterwards you’ll be shown into the stunning dining room (note the incredibly ornate ceiling, made by hand in Florence and shipped to New Zealand in 60 crates way back in the 1880s) for your evening meal, all made with lodge-grown and local ingredients.

You’ll be visiting the Oamaru Blue Penguin Colony this evening, so your hosts will interrupt dinner between courses to allow you to dine at a relaxed pace, view the penguins, and then continue your meal upon your return. If you like, they will arrange for you to be shuttled to the penguin colony—a five minute drive from the lodge—in a vintage automobile, with a short tour of nighttime Oamaru on your return trip.

Day Two: Wake up at your leisure and when ready to face the day make your way back to the dining room for breakfast. James will have fresh-baked pastries, homemade jams, granola and muesli on the table, together with fruit and yogurt, and will be at the ready to prepare eggs however you like them.

You’ll depart the lodge for a day-trip to some of the highlights of the Oamaru area, so head out and follow the route map that your hosts will give you to make your way through the rolling countryside just out of town toward the Waitaki River valley. You’ll have a chance to visit the

Elephant Rocks, a remarkable setting with unusually shaped and enormous limestone outcroppings that resemble elephants strewn randomly through a beautiful and otherworldly landscape. If you’re wondering why it looks so familiar, perhaps it’s because of the films that have used the area as a film set, most recently for The Lion, the Witch and the Wardrobe.

Before long you’ll reach the small town of Kurow, the centre of the Waitaki Valley wine district, the newest wine appellation in New Zealand. The vines you see were planted within the past 15 years, but in that short time the wines they have yielded have been recognized as the closest thing you can find to Burgundian wines outside of France. This probably stems from the similar

growing conditions here to Burgundy, since they are both located at around 45 degrees latitude and both have limestone-rich soil. You will surely want to taste these wonderful wines, and you can do so at both the Pasquale Vineyard Cellar Door, on the outskirts of town, and at the Vintner’s Drop in the centre of town, where wines from the seven vineyards in the area are available for tasting and purchase.

Here you have a choice: either continue from Kurow to Duntroon, where you can visit the Vanished World centre for a glimpse at the region’s pre-history (including fossils and unusual geological formations) and stop for a bite to eat if you’re hungry, before following Danseys Pass through some of the area’s starkly beautiful scenery toward the towns of Naseby and Kyeburn on the fringe between the Waitaki District and Central Otago. From here, head back to the Pacific coast to the historic town of Palmerston where you’ll head north toward Moeraki, one of the must-sees of the area.  Or, you can venture further along the Waitaki Valley to Omarama, the world’s leading centre for gliding, where you can join an experienced pilot in a glider for a thrilling ride over the Southern Alps and the Ahuriri/Waitaki Rivers. Afterwards, return along the Waitaki River back to Oamaru and down to Moeraki.

You’ll make several stops in the Moeraki area, starting off at the 60 million-year old Moeraki Boulders,

one of the area’s must-see attractions. These boulders were believed by the Maori to be food containers of the gods, and are similar in structure to pearls, albeit on a much larger scale. Your next stop is the yellow-eyed penguin colony at the Katiki Lighthouse, a short drive away. Here, in addition to seeing the world’s rarest penguins (only 1400 or so remain) you’ll catch sight of New Zealand fur seals, sea lions, and a variety of marine birds. By now you’ll probably have worked up an appetite, so your next stop is one of New Zealand’s most famed restaurants, the charming Fleur’s Place, where you’ll find the freshest seafood prepared by one of New Zealand’s celebrity chefs.

Return to the lodge at the end of the day for a nightcap and for a restful night.

Day Three: After another comfortable sleep and breakfast, you’ll have a more relaxing day of exploring the town of Oamaru itself. If it’s Sunday, be sure to visit the busy Farmer’s Market in the historic centre of town (open till 1pm). Otherwise, you will want to make sure to visit the town’s numerous art galleries and museums,

and peek in to see the various craftspeople at work in the many shops that dot the streets. If you’re a cheese lover, you’ll want to visit Whitestone Cheese, the country’s most award-winning cheese maker, whose cheeses are served in the country’s best restaurants and are even exported around the world. You might also want to visit the New Zealand Whisky Company to taste the whisky that in March 2014 was named the “world’s best” at a competition in Edinburgh, and the nearby Scott’s Brewery to sample their range of craft beers, including the country’s only gluten-free beers. Be sure also to visit the Oamaru Opera House, one of only seven opera houses in New Zealand, and reputedly the most beautiful. If you’re fortunate, you may be able to get tickets for a performance.

There are plenty of shops in town to explore, including several antique shops, second-hand bookstores and boutiques selling New Zealand-made gifts.

For lunch, head up to Riverstone Kitchen, a short drive north of Oamaru, where one of New Zealand’s most award-winning young chefs will prepare a stunning repast using locally grown ingredients. You’ll soon understand why it is that Oamaru produce is so sought after throughout New Zealand (and is what the Royal Family are served whenever they visit the country).

If the weather is fine, stop off at the Oamaru airfield for an aerial tour of the area. You’ll be amazed at how different the landscape looks from up high, and you can even try your hand at the flying the plane—the North Otago Aero Club that offers the aerial tours is also a fully accredited flight school, and offer mini-lessons to first-timers.

At the end of the day, return to Pen-y-bryn for a relaxed evening, or if you prefer, you can dine out at any of Oamaru’s other restaurants.

Alternative Day Three: An alternative to the above is to head south to Dunedin and the Otago Peninsula for the day. On the way south, stop at the Orokonui Eco-Sanctuary to see what the first human settlers would have encountered on making landfall in Aotearoa New Zealand 1500 years ago. All non-native species of flora and fauna have been expunged from the sanctuary, and native species returned, so you can see such unusual animals as the tuatara (the last remaining dinosaur), kakapo, weka and kea here, along with native ferns, flowers and trees.

Head into the university town of Dunedin for lunch before visiting Olveston House, a fascinating historic home that was willed to the city in 1966 and left as the original owners, a well-to-do Jewish family, left it. It’s especially interesting to compare this house with Pen-y-bryn, as both were built at approximately the same time by families who almost certainly knew one another.

Before you return to Pen-y-bryn you will have some time to do some shopping or possibly visit the Otago Settlers Museum, which offers an excellent opportunity to understand what the original British colonists experienced when making their way to this far-flung outpost of Empire. At the end of the day, return to Pen-y-bryn for a relaxed evening, or if you prefer, you can dine out at any of Oamaru’s other restaurants.

Another Alternative Day Three: Another alternative to the above is to delve into the history of the Oamaru area with a visit to nearby Totara Estate, the farm where New Zealand’s successful meat exporting business was born. Here they developed the technology to freeze lamb meat to allow it to make the

journey back to Europe, opening the door for New Zealand’s meteoric economic expansion in the late 19th and early 20th Centuries and setting the stage for Oamaru to become one of the country’s wealthiest settlements. Continue south to Clark’s Mill, the oldest water-powered working flour mill in New Zealand, where you can see the Rube Goldberg-esque contraptions in operation and wonder at the ingenuity of the early industrial age.

From here venture further south to Orokonui Eco-Sanctuary to see what the first human settlers would have encountered on making landfall in Aotearoa New Zealand 1500 years ago. All non-native species of flora and fauna have been expunged from the sanctuary, and native species returned, so you can see such unusual animals as the tuatara (the last remaining dinosaur), kakapo, weka and kea here, along with native ferns, flowers and trees.

On the way back to Oamaru you can stop in Moeraki (if you have not already done so) for a visit to the Moeraki Boulders, yellow-eyed penguins and Fleur’s place for dinner.

Day Four: It’s your last morning at Pen-y-bryn, so enjoy another beautiful breakfast before packing your bags and making your way to your next destination.

Download our Free Guide to Oamaru and the Waitaki 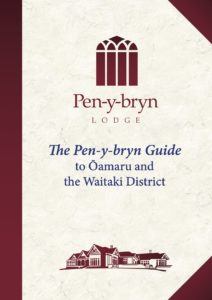 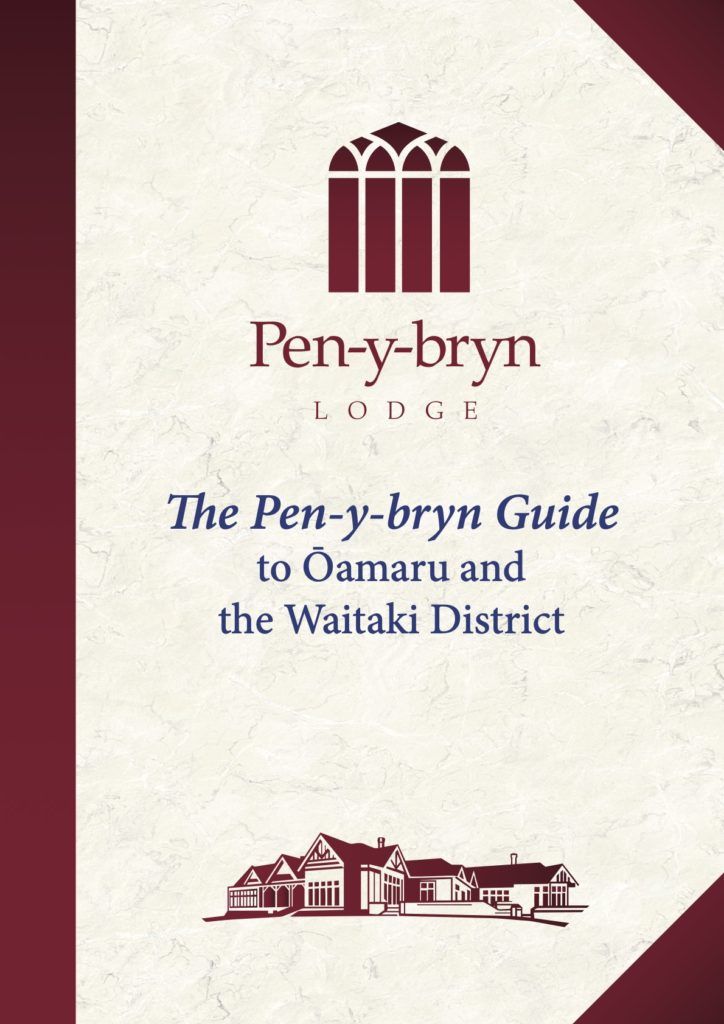