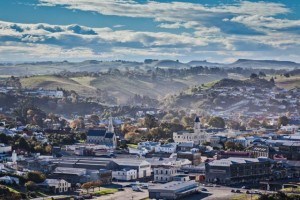 With every new edition of the Lonely Planet guide to New Zealand in recent years we have noticed the number of pages devoted to Oamaru and the surrounding area has grown progressively larger. Gone are the days when Oamaru merited a mere two pages and the sense that the town was suitable for little more than a stop en route between other destinations. When the 16th edition came out in 2012 we noted that a full nine pages were now devoted to the area, full of wonder at all the activities, shops and restaurants that North Otago has to offer visitors, and recommending that Oamaru be treated as a destination in its own right. Now that the 17th edition has been released, the editors of Lonely Planet have suddenly realised what we have long known: that “Oamaru is, put simply, New Zealand’s coolest town”. Among the reasons that Lonely Planet puts forward for this declaration is the town’s eccentric inhabitants, who are as likely to be seen rolling down the streets on a penny-farthing bicycle while dressed in full Victorian garb as to be producing a beer-flavoured cheese (using, of course, the cheese from NZ’s best cheesemaker and beer from one of our best craft breweries, both based in Oamaru), or to be coaxing award-winning wine from grapes grown in the nearby Waitaki Valley or creating a piece of art in the warm glow of our Oamaru stone buildings. Oamaru rewards the intrepid visitor who seeks something unique and personal. We hope to see you here soon!