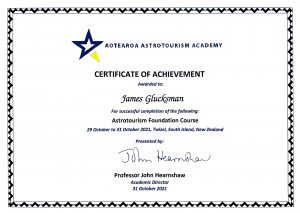 This past weekend, we took part in the inaugural session of the Aotearoa Astrotourism Academy, held in Twizel, practically in the shadow of Mt John, home to the University of Canterbury’s famed observatory. The objective of the academy is to raise the pedagogical standard of New Zealand’s astrotourism operators, and as a keen member of that group, we rushed to attend this invaluable course. Over the course of three days, we covered a range of material that is as much of interest to astronomers as it is to casual observers of the cosmos, including the make-up of stars, planets and other celestial bodies, the distances between Earth and many key objects of interest, and how to find them. We also had a chance to explore the skies with some of New Zealand’s most famous astronomers, both professional and amateur. Upon our return to Oamaru, we were thrilled to be greeted with clear skies (and a nearly-new moon), perfect for our own sky-watching, which included the chance to photograph the Great Banded Spiral Galaxy, NGC1365, located a mere 56 million light years away, and considered to be very similar to our own Milky Way (see below). While nighttime is getting shorter and shorter as we get closer and closer to the summer solstice, there is still opportunity to see the beautiful night sky even at this time of year, so if you’re interested in the stars, planets and nebulae, why not spend some of your summer under the dark skies of Oamaru? 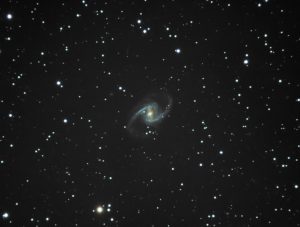